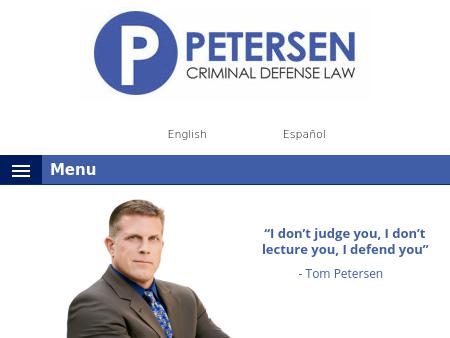 About This Law Firm

Tom is in private practice inOmaha, Nebraska, and concentrates on state and federal Criminal Defense and DUI litigation.

By the age of 16, Tom felt compelled to pursue a law career. Two years later, he secured a clerking job with a Spokane law firm. That same year, by the encouragement of his employer, he started Petersen Process Service, a one person legal processing and filing business. A year later, Tom enrolled in Eastern Washington University. He graduated in 1990 with a bachelors degree in Political Science.

Established in 1995, Petersen Criminal Defense has handled over 6000 cases. Due to ever increasing complexity and conflicting legislation, Tom has limited the practice solely to criminal defense such as drunk driving, federal crimes, sexual assault, drug crimes and violent crimes.

We offer free initial consultations that come with no obligation.